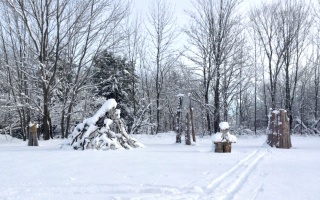 When creating art, it makes a difference having access to the right tools and materials, specially when constructing large scale sculpture, installation or land art. This very known fact became increasingly apparent at my recent Fieldwork residency, where I had the fortune to have full access to ceramic and wood shops. The objective? to develop a series of what I’m calling ‘wearable sculptures’: life-sized sculptural forms designed to frame, reflect, surround or shelter the human body.

Having the playground set (an open field and the workshops), it was just a matter of finding the most abundant, free materials available in the area. In recent projects, three things have become very important to me: to not generate but use waste, source all my materials locally, and use as little monetary funds as possible. After a couple of days of walking round scoping the site, my main material became obvious: discarded wood (leftovers from construction projects, fallen branches, and bark cutouts from a neighbor’s woodlot). To my delight, all of them had a different and fascinating quality: red pine bark that looked like pink salmon scales; white pine knots that suggested golden-tanned skin; twisty zumac branches that turned silvery against the zenit sun. The other materials just fell into place to either contrast or compliment the wood: natural and olive-green glazed ceramics, as well as gold and silver colored metal mesh.

Once I had the materials, tools, and conceptual drawings in place came the hard part: working efficiently to match what my imagination had concocted. I have to say that it was definitely a challenge, not only because it was the first time I worked with such media, but mainly because of the high temperatures and abundant insects that come included in the package of working outdoors in summer. Due to Ontario’s recent drought and bat disease (which increased temperatures and insect numbers considerably), I counted with four ‘workable’ hours in the morning (7 to 11 am) and three in the evening (5 to 8 pm), since drilling and hammering in full sun while being attacked by giant flies and mosquitoes is neither healthy nor fun.

The most valuable aspect of the project for me? I would say having the space and time to create. In our current increasingly conceptual phase of art, I cannot steer away from my deep love towards physicality (of the human body, materials and environments), and physicality only exists in space and time.